Cavenagh Bridge is the only suspension bridge and one of the oldest bridges in Singapore, spanning the lower reaches of the Singapore River in the Downtown Core. Opened in 1870 to commemorate Singapore’s new Crown colony of the Straits Settlements status in 1867, it is the oldest bridge in Singapore that exists in its original form.

Originally known as the Edinburgh Bridge to commemorate the visit of the Duke of Edinburgh, its name was changed to Cavenagh Bridge in honour of Major General Orfeur Cavenagh, the last India-appointed Governor of the Straits Settlements, who governed from 1859 to 1867.The coat of arms of the Cavenagh family can still be seen atop the signage at both ends of the bridge. 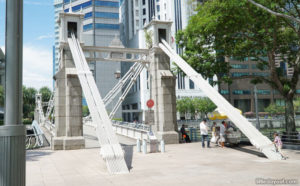 This bridge has elaborate suspension struts in comparison with most other suspension bridges, and is the third bridge to be built in Singapore. It was constructed in 1869 to allay the inconvenience of crossing the Singapore River by boat. It was originally designed as a drawbridge but on its completion was found to be suitable only as a fixed structure. Numerous steel rivets were used in its construction, which employed steel casting methods commonly used during that era.