Yueh Hai Ching Temple (Traditional Chinese Simplified Chinese), also known as the Wak Hai Cheng Bio from its Teochew pronunciation, is a Chinese temple in Singapore located in Raffles Place in Singapore’s central business district. The temple, whose name literally means “Temple of the Calm Cantonese Sea”, was the first stop for Chinese immigrants to Singapore in the early 19th century.

The early history of Yueh Hai Ching temple is obscured. Multiple narratives provide conflicting accounts on the date the temple was first constructed. Some traced the history of the temple to as far back as to 1738. The general consensus is that the temple was first put up in 1820 as a simple wood and attap temple. In 1826, pioneer of Man Say Soon Company, Lim Poon erected a shrine on the same site on Phillip Street with a 999-year lease. It was managed by a board of trustees consisting of 14 members. The shrine was constructed so that sailors sailing between Singapore and China during the 19th century could offer their prayers and gratitude for their safe journey. This is reflected in the temple’s name, which translates as “Temple of the Calm Sea Built by the Guadong People”. Phillip Street was once near the sea, so that sailors could head to the temple immediately after docking. Due to land reclamation, the temple was effectively distanced from the shore. 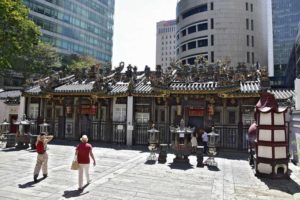 Visit one of the oldest Taoist temples in Singapore, built in the 1820s. It was originally a place where sailors and traders from China used to come and pray for safety from the rough seas. However today lovers come and pray before the black idol, the statue of Yue Lao, the bearded elder matchmaker. Do as the locals would and tie red strings together while praying to the deity of happiness and love to bless your romance.