The park has been marketed by Universal Parks & Resorts as a “one-of-its-kind theme park in Asia” and promised that the park would be the only one of its kind in Southeast Asia for the next 30 years. 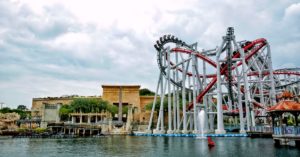 Enter the fascinating world of movies at Universal Studios and venture behind the screen. Experience the magic that conjures blockbusters on the screen, meet your favorite characters from animated films, feel the high of adventure filled roller coaster rides and get mesmerized by shows on the silver screen. Visit the Hollywood boulevard at the Studios and ride the famous Walk of Fame. Splendid fireworks lighting the night sky in tandem with brilliant music along with many other attractions will take your breath away. Universal Studios give you a glimpse of life in the city that never sleeps, New York. The city skylines merged with street entertainment create an unimaginable aura of the Big Apple. Sci-Fi City takes you through the intergalactic battles, the Transformers ride and other vibrant portals. Stroll through the streets of the Egypt zone and discover the pharaohs in a new light. Treasure hunts form an exciting part of the journey. Savor the unique cuisines of every zone at the Universal Studios while shopping for your favorite movie costumes and accessories. The Lost World, Far Far Away and Madagascar zones amplify the experience of visiting the enchanting world at the Universal Studios.