The Raffles’ Landing Site is the location where tradition holds that Sir Stamford Raffles landed in on 28 January 1819. The site is located at Boat Quay within the Civic District, in the Downtown Core of the Central Area, Singapore’s central business district.

On 28 January 1819, Sir Stamford Raffles landed at this site for his first visit, which lasted ten days.During this period, he concluded the first treaty with the local rulers.The site is denoted by a statue of Sir Stamford Raffles and is located on the north bank of the Singapore River. The present polymarble statue was unveiled in 1972 which was made from plaster casts from the original 1887 figure that currently stands opposite Victoria Concert Halls. 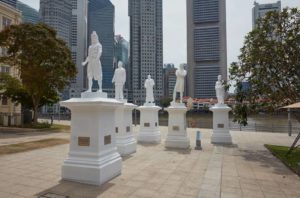 Raffles’ Landing Site is a historical site in Singapore. It is believed that this is the place where Sir Thomas Stamford Bingley Raffles landed in on January 29, 1819. Sir Thomas Stamford Bingley Raffles is known as the founder of Singapore. There is a beautiful polymarble statue of Sir Raffles at this site to pay respect to the man considered as the founder of Singapore. From the Raffles’ Landing Site, you can enjoy panoramic views of Singapore and see for yourself the contrast between the old colonial buildings and the new sky-scrapers of Singapore.