The Armenian Church of Saint Gregory the Illuminator, referred to locally as the Armenian Church, is the oldest Christian church in Singapore, located at Hill Street in the Museum Planning Area, within the Central Area. The church was completed in 1835 and consecrated the next year. Originally a parish of the Armenian Apostolic Church, an Oriental Orthodox denomination, the last Armenian parish priest left in the late 1930s as Armenian population in Singapore dwindled. It was designated as a national monument in 1973. Armenian and Oriental Orthodox services are now regularly held at the church.

The church was commissioned by the first twelve Armenian families that settled in Singapore. It was designed by George Drumgoole Coleman, the architect of many of Singapore’s early buildings who also became the first Superintendent of Public Works. The church is dedicated to St Gregory the Illuminator, the first Patriarch of the Armenian Church. 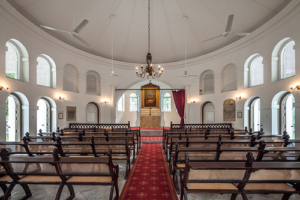 Located on the Hill Street, the Armenian Church is the oldest Christian church in Singapore. The church is dedicated to St Gregory the Illuminator, the first Armenian monk. It was designed by Irish architect George Coleman. The architecture of the church is admirable. The white portico is sustained by Doric columns and bordered by balustrades on both sides. The interiors are based on traditional Armenian architecture featuring vaulted ceiling and cupola.