The Padang (Malay for ‘field’) is an open playing field located within the Downtown Core of the Central Area in Singapore. It includes the Padang Cricket Ground. The Padang is surrounded by several important landmarks, which include Saint Andrew’s Cathedral, City Hall, the Old Supreme Court Building and the City Hall MRT Station.

Due to its prime location and historical significance, it has been used as a venue for a variety of events, including the National Day Parades some years due to the first ever National Day Parade being held there in 1966, the recently-held Singapore’s Golden Jubilee Year in 2015, and later in 2019 honouring the bicentennial anniversary since the founding of modern Singapore in 1819. Since 1995, it has been planned that the NDP would be held there for every five years, the main venue for that major event is at Marina Bay Floating Stadium (previously the old National Stadium). On November 4, 2018, Padang hosted the live finals of the Chinese-Mandopop singing reality competition SPOP Sing!. 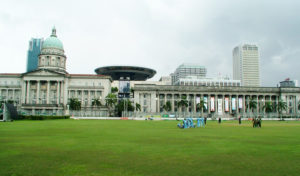 Formerly known as the Padang Cricket Ground, Padang is an open long stretch of playing field. The Padang is a popular place for locals as well as tourists to meet, sit and relax or to go for a walk or play games.