Henderson Waves  is a pedestrian bridge in Singapore. The bridge has the shape of a wave.

The pedestrian and cycle bridge Henderson Waves was commissioned by the Urban Development Authority (URA) of Singapore to open international winners convened in 2004, IJP Corporation and RSP Architects, Planners & Engineers, with the concept and design engineering according to the schemes proposed by Adams Kara Taylor of Constulting Civil and structural engineers.

The pedestrian bridge Henderson Wave, gets its name from the resemblance of its form with a wave, but also recalls the undulating forms of a snake. The total length of the bridge is 274 feet, with 7 semicurvas alternating above and below the cover, being considered the highest footbridge Singapore. Its width is 8 meters and rises 36 meters above Henderson Road highway. 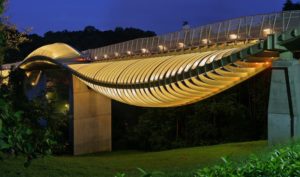 The Prime Minister of Singapore, Lee Hsien Loong officially opened the Henderson Wave Bridge on May 10, 2008. This impressive piece of public infrastructure is one of the three new “linkways” connections built by the Urban Redevelopment Authority in South Cordilleras.

At 36 meters from the ground level, Henderson Waves is the highest pedestrian bridge in Singapore. Take a walk on this beautiful, 274-meter-long bridge and enjoy the panoramic views of the surrounding greenery and the Singapore skyline. The bridge also has quaint seating areas where you can just sit and relax. The bridge connects Mount Faber Park to Telok Blangah Hill Park.