The Former Ford Factory (also Old Ford Motor Factory and Old Ford Factory depending on sources) is located along Upper Bukit Timah Road at Bukit Timah in Singapore. It is the place where British forces under Lieutenant-General Arthur Percival surrendered to Japanese forces under Lieutenant-General Yamashita Tomoyuki on 15 February 1942 after the Battle of Singapore. The Old Ford Motor Factory had since been gazetted as a National Monument in 2006, and converted into an exhibition gallery and archive named Memories at Old Ford Factory.

Surviving the Japanese Occupation: War and its Legacies is a World War II exhibition presented by the National Archives of Singapore at the historic Former Ford Factory. This is the place where British forces surrendered to the Imperial Japanese Army on 15 February 1942. The exhibition presents the events and memories surrounding the British surrender, the Japanese Occupation and the legacies of the war. 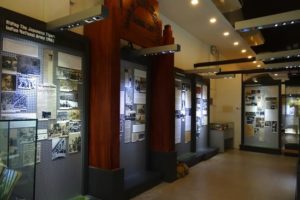 The start of the exhibition tells the history of the Former Ford Factory and offers a look into the lives of pre-war Singaporeans. Visitors will learn how the building evolved from its start as the Ford Motor Company’s first car assembly plant in Southeast Asia in 1929, to its relocation in the current site in 1941, and its status as a gazetted national monument in 2006.

The Second World War, as horrendous as it was, had something about it that fascinates people even today. So if you want to learn about the Second World War or Singapore’s role in the war, you just hasve to head to the Old Ford Motor Factory. Explore the history and relive Singapore’s past at this venerated museum which was once the first Ford vehicle assembly plant in Southeast Asia. The museum has various exhibitions that depict in vivid detail Singapore’s life and culture during the World War II. The site of the British surrender to the Japanese army has now been preserved as a permanent exhibition gallery called Memories at Old Ford Factory.