The Memorial to the Civilian Victims of the Japanese Occupation, usually called the Civilian War Memorial( Malay: Tugu Peringatan Bagi Mangsa Awam Pemerintahan Jepun) is a war memorial and heritage landmark in Singapore. It was built in memory of the civilians killed during the Japanese occupation of Singapore during World War II. The Civilian War Memorial sits on serene parkland in the midst of busy city traffic near Singapore’s Padang and City Hall. Located within the War Memorial Park at Beach Road within the Central Area, Singapore’s central business district, it is usually easy to spot in most backdrops encompassing the CBD landscape. It was gazetted as a 65th national memorial in 2013.

In 13 March 1963, Prime Minister Lee Kuan Yew set aside a plot of land at Beach Road for the building of a memorial dedicated to the civilians killed in World War II. The SCCC set up a fund committee that was later enlarged to include all ethnic groups due to good response from the community. With the support of the Government and contributions from the public, construction of the memorial was able to start. 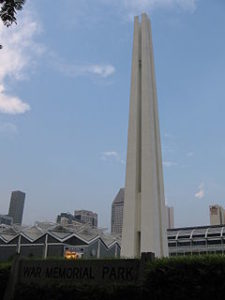