Kuan yin Thong Hood Cho Temple ( pinyin: Guānyīn Táng Fózǔ Miào) is a traditional Chinese temple situated at 178 Waterloo Street in Singapore. The temple is of significance to the Chinese in Singapore, and is believed to bring worshippers good luck after praying to the Kuan Yin, or Avalokiteśvara, the Goddess of Mercy. The temple is also involved in charity work, contributing to several health and educational organisations.

The temple has existed since 1884 at its present location with a reconstruction in 1895. The original temple was an example of Chinese temple architecture and traditional craftsmanship. In its vicinity were other places of worship such as the adjacent Sri Krishnan Temple, Church of Saints Peter and Paul at Queen Street, Maghain Aboth Synagogue and the Malabar Jama-ath Mosque. The original temple, entry was gained across a large sheltered courtyard through a porch and screened anteroom. The main hall then contained three altars, the central one for the Kuan Yin and one each for Bodhidharma (the founder of Zen Buddhism) and Hua Tuo, a Chinese patron saint of medicine and healing on the flanking altars. An image of Sakyamuni Buddha was kept in the rear hall and various ancillary rooms on either side. During the second World War, the temple was spared of destruction when all the other buildings in the area were severely damaged. It provided refuge for the sick, the wounded and the homeless. 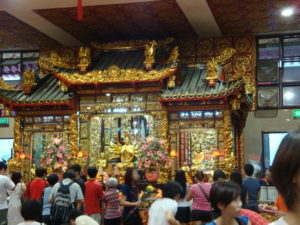 The Kuan Yin Hood Cho Temple is one of the most important traditional Chinese temples in Singapore. It is believed that if you wish for something inside the walls of the Kuan Yin Thong Hood Cho Temple, you wish is most likely to be granted. The temple sees a fairly steady stream of visitors during the important days of Chinese calendar. The devotees offer their prayers to the temple deity Kuan Yin Bodhisattva, the Goddess of Mercy.