When a friend was in Seoul, she posted an InstaStory about having a toast at EggDrop. I happily chimed in and said, “I’m going there for a tasting next week!”. That’s where the confusion comes in.

Egg Stop has recently opened in Paya Lebar Square and they are not related to the sandwich shop in Korea. Suffice to say, the chef here is Korean, at least there’s the similarity?

If you are a morning person, Egg Stop would be a hearty breakfast of choice for you — the menu consists of toasted thick bread with fluffy eggs and a topping of your choice.

The prices start from S$5.50, and the most expensive set on the menu costing about S$10, which comes with a drink of choice. 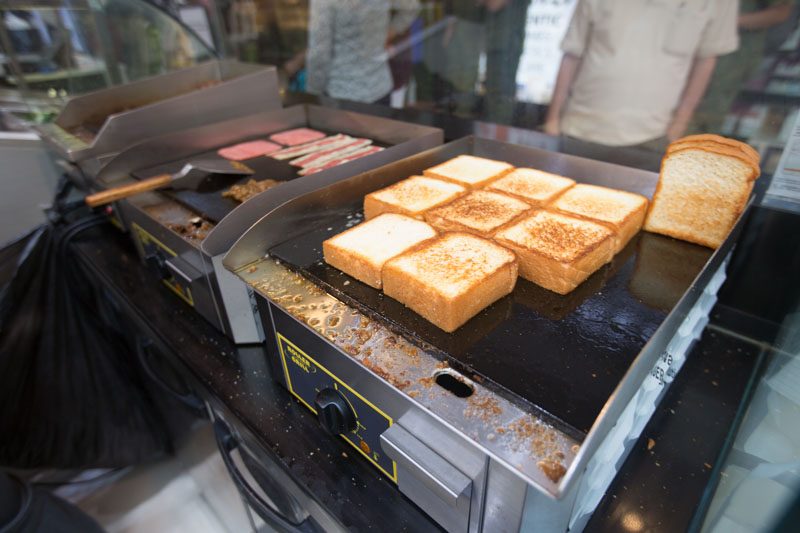 All orders are made fresh daily to uphold quality, so you don’t have to worry about being served reheated food. With the recent craze for Korean toast, you can expect a sizeable crowd almost every day. Once you’ve made your order a queue number will be given. As there are no sitting available, you can simply shop around while waiting or watch Oppa cooking up a storm. Each sandwich doesn’t vary much, the only key difference is the topping, so pick your favourite. The Beef Teriyaki (S$7.40) is made up of beef slices, egg yolk, signature sauce and teriyaki sauce. This is the only sandwich on the menu that serves raw egg yolks instead of scrambled eggs.

If you are squirmish about having raw egg yolks, you can request that they remove it, but you’ll be missing out on the eggy goodness. If you’re going to tapao (takeaway), the egg yolk would be placed separately so it doesn’t burst. Plus points for that!

They are generous on the beef toppings and there was a hint of smokiness to the meat. You’ll want to break the egg yolk before taking a bite as it adds a creamy dimension to the sandwich, bringing about a richer flavour. Creamy eggs filled The Turkey Bacon and Cheese (S$5.50), it is also served with two pieces of crispy bacon and cheddar cheese.

I have to give credit to the scrambled eggs as it is one of the best I’ve had in a while; they are light, fluffy and moist. The secret sauce and the mayonnaise tied in the flavours of the sandwich and added a little savouriness to it. Two sandwiches in, and I find the portion a bit questionable as almost half of it is empty. Once you have eaten the top half, you will be left with nothing but bread.

Some of you might prefer it done this way as the bread is good on its own, but I like my sandwich to be fully stuffed with ingredients. The Smoked Chicken (S$5.90) was a letdown. In terms of portion, one bite was all it took to finish almost three-quarter of the topping.

Tastewise, I couldn’t taste any smokiness from the chicken, and sadly, the only smoke I had was from the heat emitting from the chicken. Perhaps, it would have tasted better if the chicken meat was served together with its charred skin. The most expensive item in the menu is the Avocado and Egg (S$7.90). Two scoops of mashed avocado are added into the toast and drizzled with mayonnaise. There was nothing to shout about this sandwich as it didn’t excite my taste buds.

I did enjoy the avocado, it was creamy yet there were small chunks to munch on that provided that textural contrast to the eggs. It could do with a little bit more of seasoning to zest it up and take it to another level.

While the menu is kept simple at Egg Stop with only six selections for you to choose from, I found that there wasn’t much difference in taste.

The main highlight would be their thick toast that goes well with their scrambled egg, but I wouldn’t especially make a trip down to have them. However, don’t just take my word for it, give it a try if you’re in the vicinity.

Egg Stop will be opening a few stores in the Central and West areas of Singapore next year. So stay tuned and hopefully, the taste of the sandwiches will improve by then!