When we hear of ‘Chinese cuisine’, the immediate impression is one of dishes that are rooted in tradition and may (or may not) be dated.

As a newcomer to this playing field, Yellow Pot at Six Senses Duxton aims to re-envision Chinese cuisine as not only relevant but also sustainable.

Apart from simply feeding hungry guests, their chefs also hope to highlight the importance of sustainability through the produce they procure – from ensuring imported ingredients come from viable sources, to supporting local fisheries and farms as much as possible. There’s also a strong emphasis on the restaurant’s decor, with a thematic colour trio of yellow, black and gold, that has similarly been accorded to the hotel side by British designer Anouska Hempel. The meal started with refreshing Chilled Organic Vine-ripened Tomatoes ($8) that are macerated in “Li Hing” plum infusion. Personally, I don’t eat raw tomatoes; I can’t get past the taste and gooey texture. But I mustered up the courage to try one, and found it to be rather enjoyable.

To be fair, the plum infusion helped mask quite a bit of the tomato’s acidity and natural flavour, but its juiciness was what really won me over. Speaking of juicy, the Seared Pork Cheek ($12) was moist and tender. Dressed with cumin, chilli and mango, there was a great balance of fatty and acidic, creating a protein dish that was good enough to be eaten sans rice. 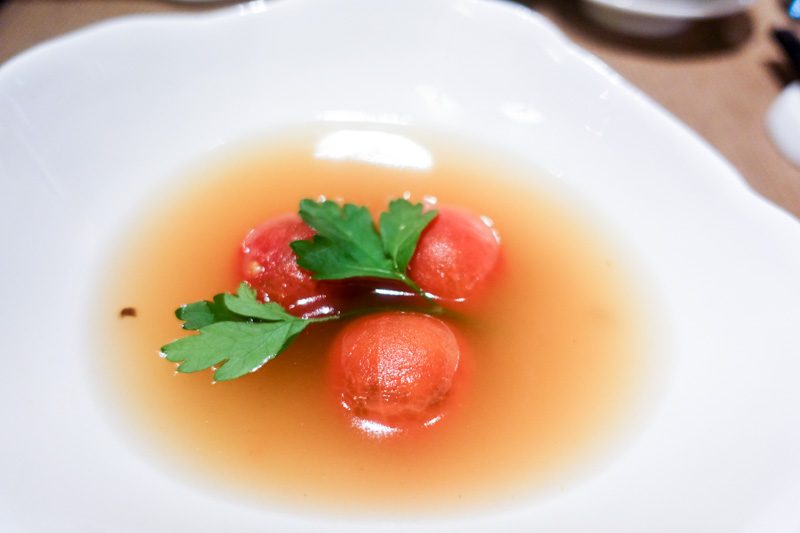 I was kind of bummed out again at first when I realised the soup I’d ordered came with whole tomatoes. The Chicken Soup ($12) comes with shimeji-stuffed tomatoes. 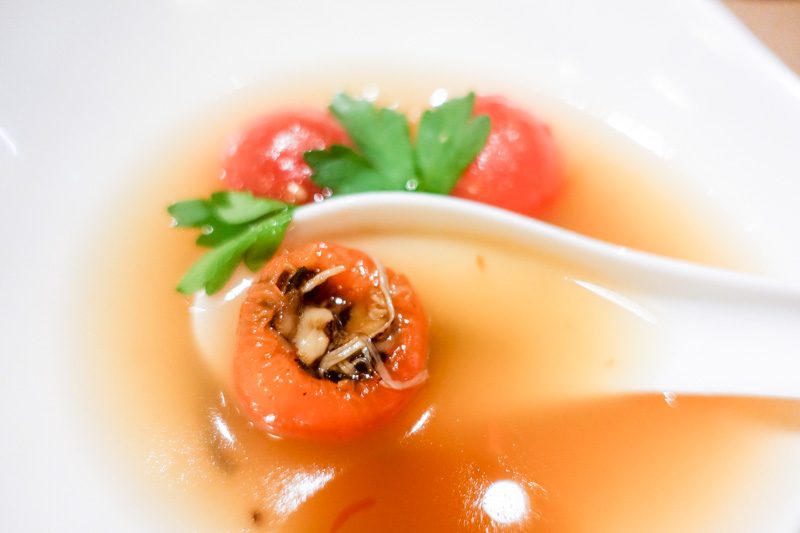 The soup itself was really hearty, and the stuffed tomatoes lent it a nice tangy touch. Even with an ingredient that’s not necessarily my favourite, I polished the soup off! It could be just me, but I seem to notice a surge of new Asian restaurants serving duck on their menu. Here is no different, with the Roast Duck ($32 for half), prepared with fermented bean curd marinade. The skin wasn’t as crispy as I’d expected it to be, but the flavours were rich with a hint of sweetness on the finish. One of the best dishes of the evening was the Wok-seared Organic Grass-Fed Beef Tenderloin ($36). It’s tossed in Himalayan salt, crushed Tellicherry peppercorns, honey and crispy garlic, so there was a nice amount of heat radiating on the palate.

There was also a nice textural variance from the fried garlic bits, which also gave each bite a nice smoky nuance. Everyone’s encouraged to eat their veggies, and with the Braised White Cabbage ($12), you’ll want to go in for seconds (and maybe thirds). Cabbage can be notoriously bitter and overly crunchy (to me at least), but these leaves are cooked with conpoy, wolfberries and Shaoxing wine, making them very savoury.

The leaves were soft and tore apart effortlessly, just the way I like them. Enjoy them with the broth for extra oomph, and soon you’ll be wishing you had a warm bowl of rice to enjoy it with. Another standout dish was the Steamed Kühlbarra Barramundi ($22), topped with scallion-ginger pesto. This dish is one of the great examples of the restaurant’s mission to support sustainability; part of the kitchen team personally travels out to Singapore’s kelongs to pick out the freshest catch.

The mouthfeel of the fish was excellent; flaky and moist. The pesto was smooth and subtly herbal, which I took an instant liking to. The entire dish was amazingly aromatic as it was brought to the table, and even if you’re not a fish fan, the smell of the dish itself will draw you in. A vegetable dish that’ll make you forget you’re getting in your greens is the Braised Sweet & Sour Eggplant ($14). The assorted mushrooms gave it a nice earthy element and the sweet and sour sauce was potently sweet.

The eggplants needed little chewing as they’re cooked till soft, which means none of the bitterness that eggplants are commonly known for. I could’ve easily polished this entire sharing dish off myself. This dish reminded me of a simple plate of comforting homemade noodles. The Stir-fried Mee Sua ($18) had generous chunks of tiger prawns and Hokkaido scallops which, of course, elevated this dish. It had just the right amount of salt, and the seafood’s sweetness really came through, indicating its freshness. After several interesting courses that clearly showed off the adept skills of the kitchen, I was feeling quite let down that the dessert was simply a jelly and fruit bowl.

The Lemongrass & Calamansi Jelly ($8) was admittedly a nice palate cleanser, but it failed to round off the meal impressively. It’s a shame really, given that the rest of the dinner was rather enjoyable and I didn’t get an opportunity to end off the experience on a memorable note.

The ambience of Yellow Pot is unlike other traditional Chinese restaurants, and they stand out even more with their goal of educating diners on the value of sustainability in the F&B business.

Did it leave an impression deep enough for me to return? I’d come back for particular dishes like the Wok-seared Organic Grass-Fed Beef Tenderloin and Steamed Kühlbarra Barramundi. Hopefully, by then the dessert offerings would have improved!