Masjid Sultan , or Sultan Mosque, is a mosque located at Muscat Street and North Bridge Road within the Kampong Glam precinct of the district of Rochor in Singapore. It was named after Sultan Hussain Shah. In 1975, it was designated a national monument.

With its massive golden domes and huge prayer hall, Sultan Mosque is a must-see if you’re in the historic Kampong Glam district.

Masjid Sultan, as it is also known, is a prominent mosque in Singapore and one of the country’s most impressive religious buildings.

The Sultan Mosque has stayed essentially unchanged since it was built, with only repairs carried out to the main hall in 1968 and an annex added in 1993. It was gazetted as a national monument on 8 March 1975.The mosque is currently managed by its own Board of Trustees and Management Board.

he mosque was built in 1824 for Sultan Hussein Shah, the first sultan of Singapore. Sir Stamford Raffles, the founder of Singapore, gave S$3,000 to the construction of a single-story building with a double-tiered roof. 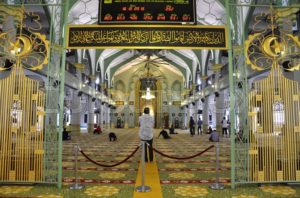 A hundred years later, the old mosque was in desperate need of repair. The present mosque as you see it today was designed by Denis Santry from Swan and Maclaren, Singapore’s oldest architectural firm, and rebuilt in 1932.

A little-known fact about the mosque’s reconstruction—North Bridge Road was actually forced to bend around the mosque as it was extended beyond Arab Street.

The Sultan Mosque, located in the Muscat street, is considered as one of the most important and scared mosques in Singapore. The mosque’s architecture represents the Islamic-Saracenic style that combines ideas from Indian and Islamic traditions. The mosque features beautiful minarets and balusters. However, the mosque’s golden dome and the huge prayer hall are certainly the best features. Devotees from all over Singapore line up at the mosque to offer their prayers to Allah.