Vegetarian food is often perceived to be healthy, but how many restaurants in Singapore actually cook genuine, healthy vegetarian dishes that are free of artificial flavourings, additives and preservatives?

It’s even harder to find vegetarian Korean food given the cuisine’s popularity for K-BBQ and chimaek (fried chicken and beer).

But at Soul Veggie, located in Chinatown, you are guaranteed 100% Korean vegetarian dishes with no garlic and onions (how?!). Stepping inside the restaurant, I noticed the simple white and green decor, inspired by their vegetarian dishes. The space was bright with sunlight cascading through the glass window entrance and it was well-ventilated with air-con. 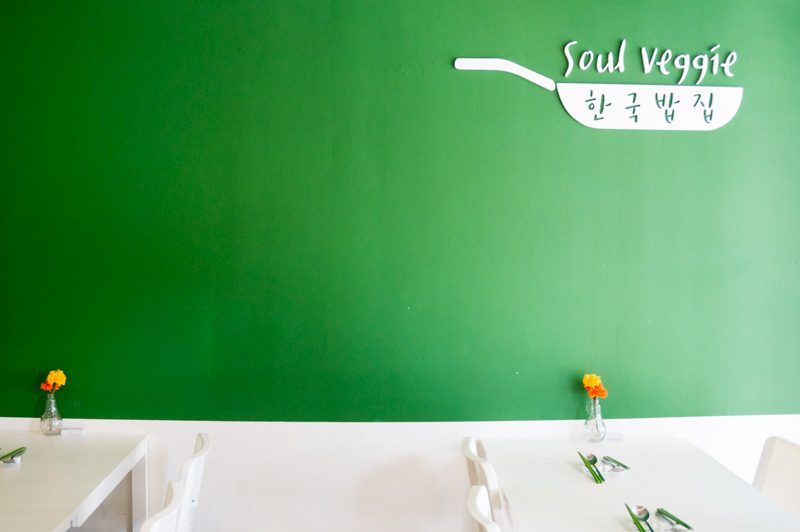 The words, “한국밥집” inscribed on the wall directly translates to “Korean food house” which made me reminisce about my mom’s cooking — making me feel at ease, almost like home. In the kitchen, the staff were quietly preparing the dishes beside Chef Se Rak Kim. He ensures the use of the freshest ingredients from the market daily, with each dish meticulously made from scratch, right down to the basic stocks and sauces.

Upon ordering our meal, he came over to ask whether we had any dietary requirements, further giving me the impression of their utmost priority in caring for their customers. To combat the heat, we ordered two of their in-house drinks; the Pomegranate Vinegar ($2.50) was refreshing, mildly sweet and tart with just the right amount of vinegar.

The Korean Plum ($2.50) was a little on the sweet side, but I found that the ice cubes later diluted the drink, making it very enjoyable. The side dishes, also known as banchan, consisted of potato salad, seasoned spinach and spicy cucumber. You might think the portion is small compared to those of other restaurants, but this made me savour the dishes more carefully and besides, you can kindly ask for more. We started off with the Dolsot Bibimbap ($12). Now, we all know this iconic dish is loved for its multicoloured veggies: carrot, bean sprouts, pumpkin, mushrooms, seaweed and toasted sesame served on top of the rice.

It also came with an in-house gochujang (red chilli paste); kimchi; and sujeonggwa, which is a dessert punch of persimmon, cinnamon and ginger. Just be careful when handling the stone bowl —  it’s hot to keep the rice warm as you eat. After thoroughly mixing the paste with the rice and vegetables, I had my first mouthful and immediately noticed how their house-made gochujang wasn’t too spicy nor sweet and had a tiny bit of graininess.

The pumpkin was my favourite part, it was crunchy and juicy, while the mushroom’s deep flavour permeated the dish. While the bibimbap was delicious, I was ready to try the Kimchi Jjigae ($12) as I was curious to taste a meat-free stock for the soup.

Chef Kim even had to let go of essential ingredients such as fish paste, garlic and onions which make the best kimchi, so I didn’t know what to expect. The first spoonful of the jjigae made me chuckle — how on earth would I be able to describe this flavour?

Maybe because the house-made kimchi was made with tomatoes, apples, pear, cucumbers as well as the usual white radish, and then combined with quite a unique vegetable stock, the soup wasn’t salty but mildly sweet; somewhat different to your regular kimchi jjigae.

But then again, I didn’t mind at all and appreciated the light and non-oily soup. It was a guilt-free dish that would be very complementary to whatever else you order. To assuage the spiciness from the soup, we had the Nokdu-Jeon ($10) which is a mung bean pancake. There were three stacked in a row with a crispy, golden-brown surface. I tore off a piece of the pancake and found pieces of chilli, carrots and mushrooms mixed in, which gave it a fun texture. Together with the zesty sauce, the jeon was neither too dense nor too airy and yet again, wasn’t oily at all.

If you’re used to just ordering the kimchi pancake at Korean restaurants, you should try this mung bean pancake for a change. You probably won’t regret it. After spotting the new menu of the month, we couldn’t miss out and ordered the Soul Veggie Jjamppong ($12), ignoring the complaints from our full stomachs.

Chef Kim shared how customers requested for a noodle dish, which brought forth the creation of this hearty portion of stir-fried noodles with green and red bell peppers, mushrooms, carrots, cabbage, and tofu skin, finished off with seaweed and sesame seeds. Lifting the noodles up, I noticed specks of pepper and thin pieces of chilli which explained the slow burn on my tongue. The sauce itself was quite thick and soaked into the chewy noodles. Before the noodles clump together, I recommend mixing everything together thoroughly with the sauce and slurp up while it’s hot.

Perhaps due to the lack of meat and artificial flavourings and additives, naturally, the jjampong wasn’t as flavourful as I thought it would be. But the tofu skin and pepper acted as healthier replacements to fill the gap. 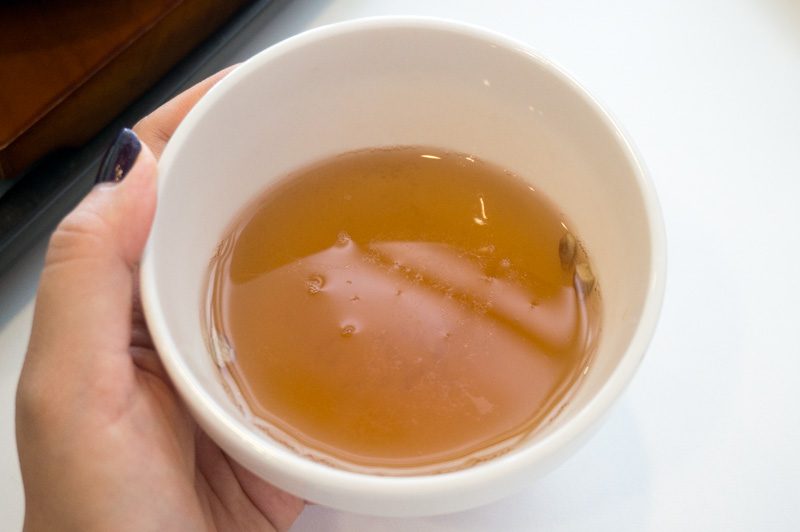 To cleanse my palate, I drank the in-house sujeonggwa which is common in Korea to have at the end of your meal. It was refreshing and slightly spicy from the cinnamon, while the pumpkin seeds brought texture to the drink.

Despite being a vegetarian restaurant, the folks behind Soul Veggie believe that their dishes are for everyone. As Chef Kim shared with us, the food might not be as exciting with the lack of additives or preservatives, but he promises the best quality and care for each customer who sets foot into the restaurant.

Our bodies could definitely use a break from all the unhealthy (albeit delicious) Korean food in Singapore, so why not give this a try instead?