Labrador Nature Reserve, also known locally as Labrador Park is located in the southern part of mainland Singapore. It is home to the only rocky sea-cliff on the mainland that is accessible to the public. Since 2002, 10 hectares of coastal secondary-type vegetation and its rocky shore have been gazetted as a nature reserve and its flora and fauna preserved by NParks. The name Labrador is derived from “Labrador Villa”, the name of the residence of prominent ship chandler, George John Mansfield, built in 1881. Known as Fort Pasir Panjang, it was one of 11 coastal artillery forts built by the British in the 19th century to defend Singapore’s waters..

Labrador Nature Reserve is the site where many historical relics and natural artifacts are located in Singapore, most of which date from the Second World War and earlier periods of time, much of which were left behind mainly by the former British colonial legacy on the island. This is due to the fact that the area has a long history dating way back to the 19th century and its playing of a significant role in the history of the city-state.

The entire nature reserve, together with the current park, used to be known as Pasir Panjang Beach (Pasir Panjang, translated from Malay, means similarly as “Long Beach”). The area used to be where a long strip of coastal land was at high tide and a rocky beach was at low tide before land reclamation took place and formed the seawall and the modern park seen today. 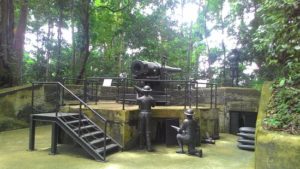 Located in the southern part of the main island of Singapore, the Labrador Park is a treat for nature lovers. Offering stunning views of the sea, the park is home to the only rocky sea cliff on the main island of Singapore. Abundant flora and fauna make the park even more irresistible. More than 70 species of birds have made Labrador Park their home. Labrador Park is also famous for its role in the World War II as well as previous wars. The Labrador Fort was one of the 11 coastal artillery forts built by the British in the 19th century to defend Singapore’s waters The remnants and ruins of the fort tells the story of World War II.