Kusu Island is one of the Southern Islands in Singapore, located about 5.6 kilometres (3.5 miles) to the south of the main island of Singapore, off the Singapore Straits. “Kusu” means “Tortoise Island” or “Turtle Island” in Hokkien; the island is also known as Peak Island or Pulau Tembakul in Malay. The word kusu also means flatulence in Tamil, one of Singapore’s official languages—however, this is in no way related to the name of the island, and is a misconception. From two man outcrops on a reef, the island was enlarged and transformed into an islandland of 85,000 square metres (914,932 sq ft).

The legend behind the island says that a magical tortoise turned itself into an island to save two shipwrecked sailors – a Malay and a Chinese.

At the top of the rugged hillock on Kusu Island stands three kramats (or holy shrines of Malay saints) to commemorate a pious man (Syed Abdul Rahman), his mother (Nenek Ghalib) and sister (Puteri Fatimah) who lived in the 19th century. Many devotees will climb the 152 steps leading to the kramats to pray for wealth, good marriage, good health and harmony. The shrines are also popular with childless couples who would pray for children. Despite misconceptions, they do not pray to the kramats.

Also located on Kusu island is the popular Chinese temple – Da Bo Gong or Tua Pek Kong (Grand Uncle) and Na Tuk Kong(Dato Keramat). Built in 1923 by a wealthy businessman, the temple houses two main deities – the Da Bo Gong and Guan YinN(Goddess of Mercy). The former is highly regarded as having the power to confer prosperity, cure diseases, calm the sea and avert danger, while Guan Yin is known as the ‘giver of sons’. 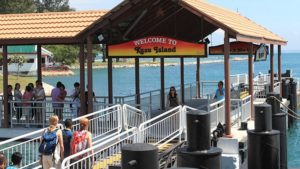 Kusu Island is located about 5.6 kilometres south of the main island of Singapore and is one of the oft visited attractions of Singapore. Not only is the island serenely beautiful, it is also a treasure trove of activities. Kusu in Chinese means ‘tortoise’. Enjoy sitting by the picturesque lagoons, have fun at the pristine beaches or learn more about tortoises at the Tortoise Sanctuary. The island is an important pilgrimage centre too thanks to its many holy spots. Every year, during the ninth lunar month, pilgrims from all over Singapore flock to the island to observe the annual Kusu Pilgrimage.