Omakase, a Japanese phrase that translates to, “I’ll leave it up to you” is often referred to in the culinary world as a meal that is left entirely in the hands of the chef.

The uncertainty of it might stir some apprehension at first, but the works of a chef who has utmost creative freedom can be a true stunner.

Take Kappo Shunsui for example, an exclusive Kyoto Kappo-style restaurant concealed within the walls of Cuppage Plaza, without a trace of signages to indicate its presence.

In fact, the walls are completely bare except for a biometric scanner, which is what keeps access to this eatery so exclusive. Inside, you’ll be lead through a small passageway before reaching the small dining area. We were told that all these were put in place to retain the privacy and exclusivity that its counterpart in Kyoto once had. Regulars can have their fingerprints registered while new visitors can always ring the doorbell to gain admission. At the time of my visit, Chef Nobuhiro, backed with his family’s 200-year lineage of chefs, had just taken over the reins at Kappo Shunsui as its new Executive Chef. I was lucky enough to have a taste of his curations, set to continue the restaurant’s tradition of showcasing Japan’s prime seasonal ingredients with two different Omakase menus.

For our night of luxurious dining, we were treated to the 9-course Shun Omakase Menu ($250++) alongside a flight of Sake Tasting ($59++). There’s also the more affordable 8-course Mizu Omakase Menu going at $150++ per pax. First on the menu was the Sakizuke – Six Kinds of Seasonal Appetisers. Taking our taste buds on a tour, the dish consisted of the Japanese mountain peach, Japanese corn, soy bean, grilled freshwater eel, anti-ageing seaweed with octopus and a slice of A4 Kagoshima Beef simmered with peppercorn and soy sauce.

Despite the great flavour that each element on the plate brought to the table, I would’ve preferred a more cohesive dish. This was paired with the first flight of plum-based Sake, the Ume No Yado Umeshu Nihonshu Jikomi that had a great tart yet umami aftertaste, which really helped to whet our appetites in anticipation of the following dishes to come. Because Kappo cuisine is all about creating balance throughout the course of a meal, it’s characteristic of the chef to use five primary cooking techniques: grilling, steaming, frying, simmering and raw preparation.

Following the appetiser, we had the Oshinogi – Sticky Rice with Abalone that really reminded me of the familiar mui fan that was a little bit closer to home. The sticky rice was coated in a mildly-starchy sauce that paired well with the thick, juicy slices of abalone that topped the dish. An overall easy-to-like ensemble, I’d term this the comfort food of fine dining. Falling under the ‘Simmering‘ preparation method, the Owan – Scallop Fish Cake Dumpling with Grilled Eggplant acted as a palate cleanser but didn’t do much for me other than that. I was expecting meat wrapped in flour skin when the term ‘dumpling’ was raised, but instead ended up with a huge piece of what tasted only like a fish cake.

I also found the broth lacking the flavour that I was seeking, but it was explained to me that the bonito was intentionally boiled at only 90 degrees, so as to not extract all the bonito flavours, preventing the dish from becoming too heavy. We were then presented with the next three flights of Sake – Matsu No Tsukasa Junmaiginjo Ryuo, Yokoyama Goju Junmai Daiginjo White and the Juyondai Junmaiginjo Banshu Aiyama (left to right). They were meant to be paired with the raw dish, fried dish and heavier rice-based dish later on. Sashimi‘s always my favourite part of any Japanese meal, so the Otsukuri – Five Kinds of Seasonal Sashimi was one of my most anticipated courses. As with any sashimi-lover, the creamy uni was a real treat for us. Each piece on the plate was brimming with flavour and freshness, attributed to the fact that 99% of the restaurant’s ingredients are flown straight from Japan’s famous Tsukiji Fish Market. By now, you should’ve already noticed that Kappo Shunsui takes pride not only in their food but also their plating. I really loved the presentation of the Agemono – Japanese Sweet Fish, Amera Tomato, Japanese Broad Bean, whose plating reminded me of ancient Chinese coinage. The fish has been fried thoroughly enough for you to be able to consume every part of it — even its head. Having a whole fish head sitting in front of you at the dining table might leave some intimidated at first (I know I was!), but keep an open mind about it.

Pop the whole thing in your mouth and the crispy, tasty bite will have you forgetting about the sight soon enough. Both the batter and fish itself are so paper-thin, it’s guaranteed not to leave you feeling jelak. As advised, the fish is best enjoyed dipped in the Japanese Rock Salt that accompanied it on the side. Crossing the halfway mark of the meal, our dinner was interspersed with a lighter course, the Hashiyasume – Octopus with Tomato and Plum Sauce. 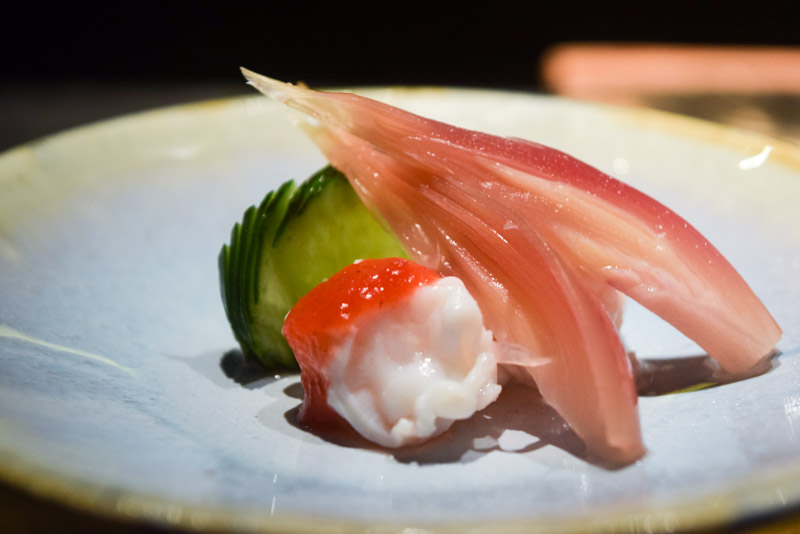 Unlike what I’m used to, the octopus served to us had a much softer, almost crab meat-like texture. I had to leave the Vinegar Marinated Japanese Ginger Flower out though because I found it to be too acidic for my liking, but to each its own. Nearing the end of the meal, we rounded up the night with heavier flavours. The Yakimono – Pan Seared A4 Kagoshima Wagyu  Tenderloin Cut served with Steamed Japanese Winter Melon easily made it to our top favourites. The perfectly seared Wagyu beef chunks are everything you’d expect them to be —  juicy, tender and bursting with flavour, and we even needed a moment to take in the richness of it all. We came down to the heaviest part of the meal, the Donabe – Kumamoto Wagyu Claypot Rice which was torched directly in front of us.

We were admittedly starting to feel full at this point, but the watching the beef reach a perfect doneness coupled with the aroma wafting through the air got us salivating once more. The pot was finished off with a few sprinkles of chopped spring onion. Then, the rice was then mixed in and portioned out by our host. I loved the combination of tender beef slices and slightly charred rice so much that I gulped down two servings on my own (yes, you get to enjoy refills until the bowl runs out). Plus, the dish is also laced with peppercorns for that added numbing kick. We reached the last course all too quickly, and soon found our meal coming to an end with the Kanmi – Japanese Red Melon with Ginger Pudding. 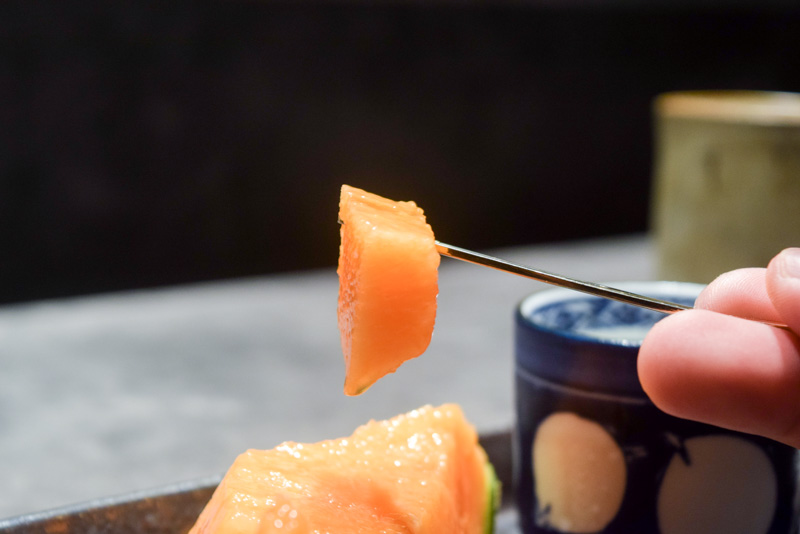 Remember how $50 melons from Japanese fairs used to be a thing? This tasted exactly like it, and quite possibly the sweetest, juiciest melon I’ve ever had. As for the ginger pudding, my aversion to ginger made a huge sceptic out of me at first. Surprisingly though, I ended up actually liking the pudding because the milkiness helped to mask any strong ginger flavours. You could think of it as Teh Halia in pudding form. The light-bodied yet mildly sweet Kyokuko Kijoshu Hyaku 2017 Sake was a pleasant finish to our Omakase meal.

The next time you’re looking for a whole new dining experience, give the exclusive Kappo Shunsui a shot and you’ll be spoiled with fare that’s well worth the price.