Those who are well-acquainted with the Japanese and Korean languages will immediately pick up the double meaning behind the name of this little cafe along Guillemard Road.

“Haru“, meaning “spring” in Japanese, and “day” in Korean symbolises a joint that strives to keep things on their menu state-of-the-art.

Before we start, here’s a fun fact about Haru’s logo: the Mandarin characters “三人一口”, which directly translates to “three people, one mouth”, not only signifies the joint’s trio of father-and-sons co-owners, but when you combine the characters horizontally, they come together to form the word “春”, which (wait for it) means spring in Mandarin!

Mind-blown yet? Yeah, me too. Hands down one of the cleverest logos I’ve seen, as I was telling Benedict, the chef and co-owner of Haru. As you can see, the space isn’t huge but it helps to regulate the customer inflow, especially since they’re still new and in the midst of refining their menu. Here’s a peek of Benedict behind the counter, along with his two other colleagues — a humble team for a comfortable space. I couldn’t resist getting this shot of all our drinks together — look how gorgeous they look served on the bamboo tray! I gotta say, I’m a huge tea-lover, so you can only imagine how psyched I was to try them all. The Genmaicha ($4) came with a side of ice and two mochi balls, which is a lot going on for four bucks if you ask me. My guess is that the mochi provides a sweet contrast to the otherwise heavy roasted flavour of the Genmaicha. Like most roasted teas, it didn’t disappoint with its fragrance. Also, there’s enough for you to fill more than just one glass, making it even more of a steal. Now, on to my kryptonite — or as most people call it, milk tea. We had the Matcha Milk Tea ($5) and Houjicha Milk Tea ($5), both of which were aromatic blends in their own ways. The Matcha Milk Tea was really rich and milky, exactly how I love my Matcha lattes. The roasted flavours in the Houjiacha Milk Tea, on the other hand, were a tad too strong for my liking, but I can’t deny that it was a decent cup nonetheless.

Another thing that’s interesting about Haru’s drinks menu is that they include information on every beverage’s type, from the brewing process, region and taste profile, which really aids your decision-making process a fair bit.

After raving about the drinks, it was time to give their dishes a taste. The Salmon Tartare “Bo-ssam” ($5) was an interesting mix of yuzu-soy salmon tartare with soy-cured egg yolk puree, Japanese cucumbers, lime and Furikake atop Perilla leaves. I would say that this is something like sashimi with a tangy twist. It’s meant to be wrapped in the Perilla leaf and popped into your mouth, kinda like how you’d have your Korean BBQ in lettuce. But you can be like me and leave the leaf (see what I did there) out if you don’t like the earthy contrast. Contrary to the affordable price tag on the previous appetiser, this Sakura Ebi Soba ($15) was a little on the pricier side. Buckwheat Soba with Sakura Ebi and Yuzu cream broth didn’t sound like a good idea…and didn’t taste like it either.

Perhaps this combination is an acquired taste, but I just wasn’t feeling it. Having Soba noodles drenched in piquant cream along with a soy-cured egg yolk left my taste buds feeling kinda confused. Finally, it was time for the much anticipated Chazuke bowls. For the uninitiated, Chazuke refers to a Japanese dish made by pouring green tea, broth or hot water over a bowl of cooked rice. Haru’s signature Poached Lobster Chazuke ($19) came with a side of bonito kelp broth and a bowl of seaweed and cucumber, as all Chazukes do over here.

With each bowl, you also get to choose between a base of multigrain rice or Japanese pearl rice. 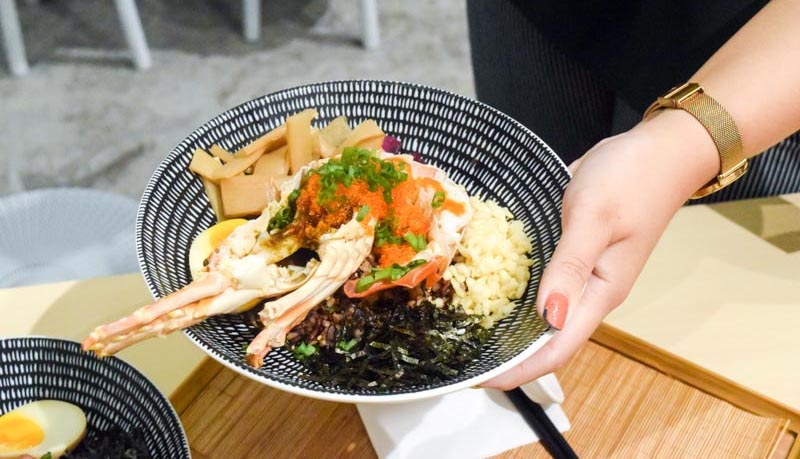 It was served with half a bamboo lobster, sprinkled with Tobiko and dressed in Gochujang sauce. Gochujang is a popular Korean hot pepper paste, often used to marinate Bulgogi dishes.

The lobster provided a much-welcomed chewiness, although I’d say that it was nearly overcooked to the point that it was almost rubbery. In all its heartiness, I’d still think twice before ordering it because of the hefty price tag. Special shoutout to their multigrain rice though, I’m a huge fan! Others usually lie about their ‘multigrain’ rice and end up serving a mix of brown and red rice, but the one here at Haru is the real deal. A good mix of barley, purple rice and other grains, it really gave me the bite I always look for in a bowl of rice. I’m a sucker for salmon sashimi, so I was most looking forward to the Aburi Salmon Chazuke ($18). I was expecting to get lightly torched slices of salmon, but was disappointed when I found salmon dices that were torched all around.

Contrary to my dismay, my colleague who swears never to touch raw food actually enjoyed the salmon, precisely because of the fact that it was almost cooked through. Now that you’ve been warned, don’t have the same mistaken expectations as I did. The Sake-Soy Marinated Beef Chazuke ($18) isn’t one of those wagyu beef bowl wannabes, and is, in fact, the best bowl here in my opinion.

The air-flown Australian beef rump was both tender and flavourful, which is one of the best combinations you can have in your meat.

My colleague liked that it was a lean cut of beef, unlike those fatty slices you get usually. Yet, I know there exists those who claim that the fatty parts are the best assets of the bowl. Regardless of which team you’re on, you should definitely give this a shot. The last bowl for us to stomach was the Anago & Ume Chazuke ($18). Unagi (freshwater eel), is commonly found in Japanese cuisine, but how often do you get to try Anago (saltwater eel)?

Benedict explained that the Anago is leaner than the Unagi, and also more flavourful on its own, attributed to the fact that they thrive in saltwater.

Indeed, the Anago slices could be appreciated on their own, and went great with the pearl rice too. This is a must-try if you’re a seafood fan. The pudding had a super smooth texture and even wobbled when we lightly shook the glass. The mark of truly good pudding? You be the judge. After the meal, Benedict invited me upstairs to Haru Black, which is the bar counterpart of the cafe. Run by his younger brother, it’s currently still a friends-only space, although they have plans to open it up to small crowds very soon.

Apart from nightlife, Benedict also has the kitchen-to-doorstep aspect of food covered. As he told me, he’ll be launching Mrs Bao very soon, a bao delivery service. Rest assured that the baos will be banged out from the Haru kitchen, so you’ll be getting the same quality of food.

Taking the food scene by storm, the brothers at Haru are surely a pair to watch.