A good bowl of ramen is a staple in our cravings for Japanese cuisine and if you’re looking for a selection of unique ramen dishes, Ebi-Tori Menzo at South Beach will fascinate you with their signature dipping noodles and a fusion of different ingredients in a single bowl.

Surrounded by glass panels in blue-green tinge, the mid-sized restaurant had large photos of their signature dishes displayed on the exterior, which made it easy to locate among the other eateries at the South Beach Avenue. The interior had plenty of natural sunlight shine through the glass panels, but as the day grew darker, the hanging lights enveloped the space in a warm yellow glow.

The tables and chairs were neatly organised, and on one side of the walls were writings in Japanese characters and a mural of ingredients which go into making the tsukemen. Facing the cashier was an open kitchen, where the chefs effortlessly tossed the noodles in strainers and chopped fresh garnishes amidst the steam. To start off, I decided to get a soup ramen which includes a slab of chashao with the choice to opt for straight or flat noodles and any add-ons to your liking.

For my Shio Chicken Ramen (S$15.90), I went with the flat noodles. The ramen came with a pair of thin sweet potato crisps, bamboo shoot chunks, thick chashao and a bed of greens on the top. 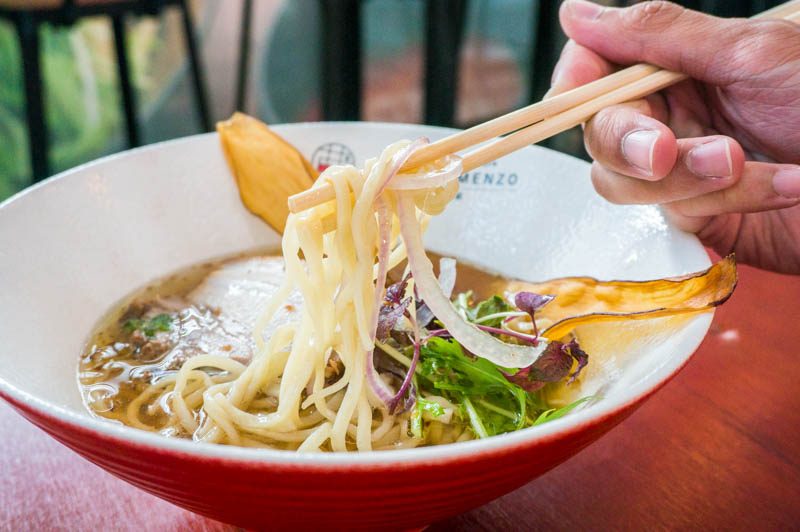 You’d expect the shio broth to be salty, but it was pleasantly light albeit oily, thoroughly soaking the springy noodles.

The greens freshened up the dish — the shreds of purple onion added a spicy crunch, while the sweet potato crisps gave the dish a gentle, fried sweetness. I take my chashao in ramen very seriously and Ebi-Tori Menzo’s didn’t disappoint. The meat fell apart easily when I held it up with my chopsticks and its fats melted on my tongue. Definitely a great start to the meal! For my next bowl of soup ramen, I gave the Shoyu Chicken (S$15.90) with straight noodles a try, which was heavier in broth than the previous dish. I made sure to have a spoonful of soup together with the noodles, which resulted in a mouthful of chewy noodles infused with the deep shoyu flavours. The chashao was extremely tender once again but further coated my tongue with a heavy umami flavour due to the thicker broth steeped within the meat.

While both the shio and shoyu soup ramen were delectable, I enjoyed the former as it was simple yet hearty in my stomach. What I truly came to Ebi-Tori Menzo for was their signature tsukemen, and I didn’t know what to expect when I ordered the Original Ebi (S$17.90).

It came with leeks, chopped tomatoes, cress, mizuna (Japanese mustard greens), a lemon wedge, diced sweet potato, chashao, and wait for it — a piece of baguette (wait, what)!

The ebi dipping sauce came in a smaller bowl on the side. The guidelines on the table showed how to properly eat the tsukemen, it was indeed helpful for a first-timer like me. As instructed, I squeezed the lemon evenly onto the dry ingredients first. If you’d like even more toppings, you can add other vegetables like baby corn, as indicated on the menu for S$1 each. Having dipped the noodles into the soup, I tried my first tsukemen and expected a pungent wave of shrimp along with a wide variety of other ingredients sketched on the wall.

At first, I could taste the distinct taste of the shrimp, which reminded me of a lobster bisque, but somehow the flavours didn’t really come through as I would’ve liked.

On the bright side, the toppings were fresh, and I thoroughly revelled in the unique combination of ramen and baguette in one dish. After you’ve finished the tsukemen, you can ask for rice with milk soup and ladle in the remaining ebi sauce to enjoy a creamy porridge. For an even more avant-garde take on ramen, you can try their recently added Mazesoba (S$15), which is a cold ramen.

It is served with stewed enoki mushrooms, chashao, shaved daikon, seaweed and chopped spring onions, with two ramen eggs on the side, in a pool of the chef’s secret mayo sauce. I tried the chashao with the stewed mushrooms first and found the mushrooms to be sticky in a sweet soy sauce and the pork chunks were soft, yet again. (kudos to Ebi-Tori Menzo’s consistency!) The shaved daikon and the coldness prevented the dish from being too jelak as I slurped up the noodles soaked in the creamy soup.

Due to popular demand and positive feedback from customers, this dish may be added to the menu permanently. As a mayo-hater, the mazesoba wasn’t overly strong with the dressing which made it quite nice to eat. I also had a glass of our very own local Rye & Pint Brewery’s Sunday’s Brew Pilsner (S$8.20). It had a bright citrusy aroma and mild sweetness, which was perfectly light to wash down the heavy lunch. At this point, my stomach ballooned with food, but when they mentioned another permanent-to-be dish, I couldn’t say no. While the eatery specialises in ramen, they also have options of dons. Marinated in red wine sauce and pepper, the beef was tender but tough to chew for some parts of the tendon. The chopped spring onions freshened up the dish and you can let the egg yolk run on the ginger-infused chewy rice. The Chashao Don ($7, $4 for Mini Chashao Don) is already on the menu and boy, would I come back for this! The chashao was peppery and quite salty with a melt-in-mouth tenderness enhanced by shreds of spring onions and chewy Japanese rice. We can’t forget about the side dishes at a restaurant, and I tried the Karaage (S$6), which was presented along with leafy greens and three sauces of cajun, sweet chilli and yurinchi (sweet and sour sauce). The fried chicken pieces were sizeable and had a nice golden-brown crispy layer without being oily. Each morsel of the meat was juicy enough alone that there was no need to dip the karaage into the sauces.

I stretched the limits of how much a human being can eat in one sitting, what with a wide selection of soup ramen, dons, as well as side dishes. It was only possible because the dishes at Ebi-Tori Menzo were tasty and in fact, affordable for the portions, which makes the calories and a painfully overstuffed stomach worth it!