The journey into Sentosa can be considered an arduous one for many, and it’s one of the reasons why there are still many unsung heroes (and in the process, underrated) restaurants that deserve recognition.

One of them is CURATE at Resorts World Sentosa, Singapore’s first establishment to be conceived as a Michelin showcase.

This means that every quarterly, a Michelin-starred chef takes over the reigns of CURATE’s kitchen to stage his or her best dishes and gives gourmands an ever-evolving taste of some of the best food in the world. That’s not to discount resident maestro, Chef Benjamin Halat, and his incredible culinary flair, as he serves up the Spring Menu for 2018 that’s rooted in his German heritage and brings authentic, yet modern flavours of what German families would typically enjoy this renewal season of the year. One wouldn’t imagine one’s self to be having an indoor picnic, but that’s exactly what my dining partner and I were treated to, complete with fake carpet grass to set the mood. The staff brought out the first course, Brotzeit (snack time), with an elaborate picnic basket, filled with six different items to whet our appetites. They looked almost too adorable to eat! Talk about miniature, the picnic was also accompanied by a tiny mug of radler made with Erdinger, topped with lemon foam. I especially loved the zestiness of the lemon foam that complemented the slightly hoppy beer. Krabben Broetchen is a sweet prawn puff with remoulade sauce, taking inspiration from a similar German dish that is typically served in a bun.

I loved the balance of the light airy puff with the savouriness of the remoulade sauce. It was potent but in a small portion, very satisfying. Cradled in between two thin dark beer chips, we had a foie gras pate with pickled cucumber gel. Named Leberwurst Brot, the foie gras was exceptionally gamey (something to take note of if you aren’t a fan of such strong flavours), but the sweet dark beer chips actually helped in ‘lifting’ the heaviness of the pate.

I can safely say it’s a bite that’ll take time for most palates to appreciate. What’s a picnic without a little bit of grill? Chef Halat’s interpretation of Radi & Rauch is a charcoal-grilled fish with pickled daikon that is very popular and commonly seen in beer gardens in Bavaria during this season.

The texture was smooth, while the smokiness was contrasted with the sweet flesh of the fish. It’s difficult to compare this dish to something I’m familiar with, but I still enjoyed it all the same. To round off the first course, guests will be treated to a classic Almdudler – an Austrian mixed herb lemonade consisting of 32 different herbs and flowers from the Alps! Some of these ingredients are hard to procure here so Chef Halat’s family even helped out by sending them over.

Even with that many ingredients, the drink was very light and refreshing. It didn’t even taste as sour as one would expect a lemonade to be. Instead, it leaned more towards a floral and subtly sweet beverage. What’s most interesting about this dish was that Chef Benjamin shared that the pine needles used are the tips of the pine fir that are young and only available in Spring. The almonds, too, are green almonds that have a brief availability period of four to six weeks during the season.

Needless to say, the texture of the trout was exceptionally fatty. The crushed almonds gave the dish a more earthy element that harmonised with the trout effortlessly. Spring is well-known for providing one of the most sought-after produce, white asparagus. The Spargelzeit is white asparagus coated in salted egg yolk cream, with French Gillardeau oyster that’s topped with (wait for it) foam that’s made from white asparagus and oyster water. 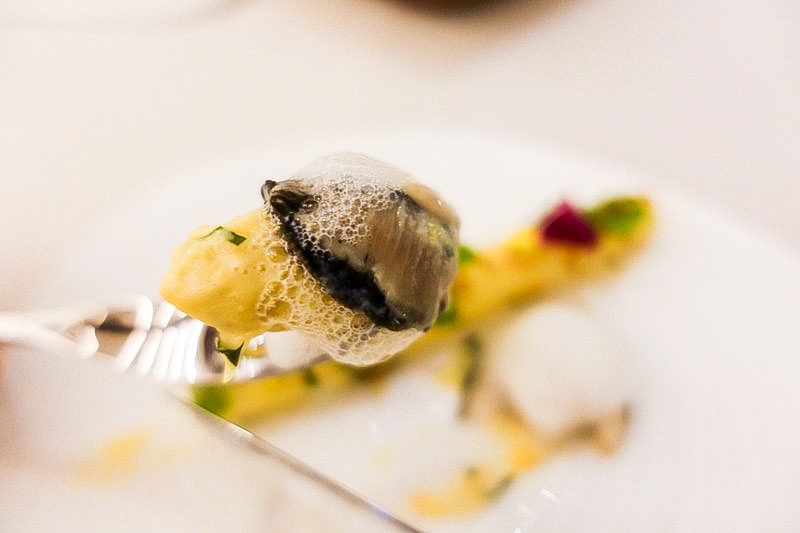 I definitely have never had salted egg yolk in this manner before, and it took me awhile to really let the medley of flavours sink in. I loved how briny the oyster was, and I felt that its delicateness was the outstanding element that brought the entire dish together. I must say, the highlight of my evening was found in the Russishes Ei. Not only because it is Chef Halat’s signature dish, but because just one look at it got me baffled. Was it a souffle? Was it a custard?

It’s actually soufflated egg that sits on potato cream, and is surrounded by champagne foam. For extra decadence, it’s crowned with Beluga caviar — the most expensive caviar in the world. The texture, first of all, was like nothing I’d experienced before; it was a toss between a foam and an airy sponge. In the centre, I was hit with a creamy, eggy warmth before the saltiness of the caviar kicked in.

It’s an almost ethereal mouthfeel and experience, and at that moment I was so grateful that I’d had an opportunity to taste such exquisiteness. Himmel & Äd (which means ‘heaven & earth’) is a dish that represents the matrimony of produce that grows above and below ground. Here, apple ragout with bacon and mashed potato is served alongside poached Atlantic cod wrapped in an onion omelette, and Myoran hollandaise sauce.

I first noticed how tender and flaky the Atlantic cod was, and I loved the strong natural sweetness that came through. The apple ragout was only subtly tart, but was complemented well with the luscious and smooth texture of the mashed potato.

On a whole, this dish was simple and straightforward, both in concept and flavours. It may be a mouthful to pronounce Zwiebelrostbraten, but if it means I’d get to enjoy this dish in the future, I’m willing to learn.

Here we have an Australian wagyu Wylarah beef sirloin, prepared medium, complemented with potato gnocchi topped with black truffle, with a tiny pool of beef jus and chive oil. I could effortlessly cut through the wagyu beef, and really enjoyed how the beef jus and chive oil elevated a single bite to a richer taste, with a slightly acidic complexity.

The marbling on the beef was sublime, and it was certainly one of the best cuts I’ve had in a while. 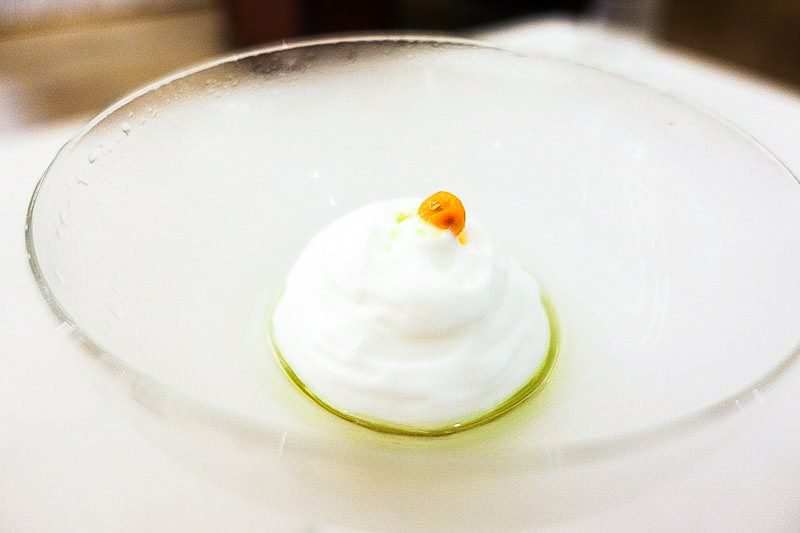 Finally arriving at dessert, and the first of two was the Sanddorn. It looked adorable in its bowl, but packed a zesty punch! 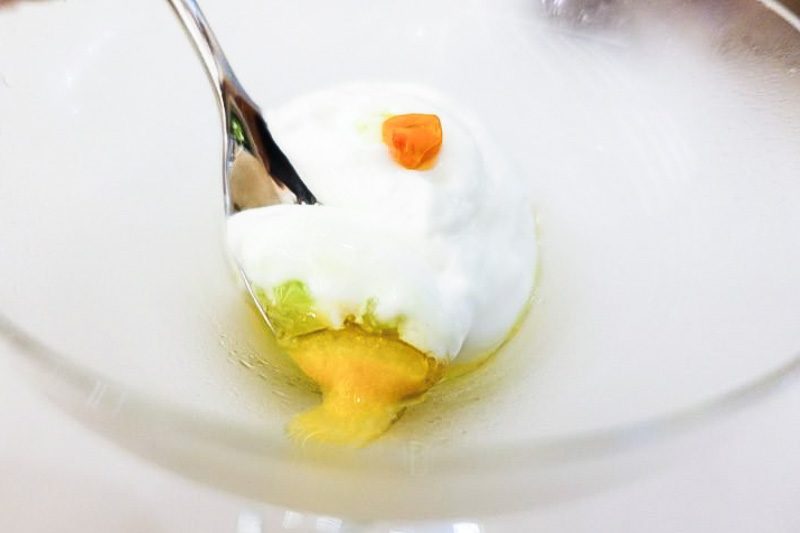 I don’t usually go for sour or citrus desserts, but I was very accepting of this as it helped to clean the palate and served as a gentle wake-up from the approaching food coma.

The airy espuma counterbalanced the strength of the sorbet, and I was surprised by how much I grew to like this. Last but not least, we had another of Chef Halat’s specials, one that’s near and dear to him — the Omis Erdbeerkuchen. It’s his grandmother’s recipe for a strawberry tart that uses European wild strawberries and sour cream. The crust was my favourite part; crumbly and buttery. There’s really nothing that can beat a homemade recipe, and this dessert surely felt like a nostalgic piece of home. The cream flowed freely upon the first forkful I took, and the strawberries were aptly tart enough to pair with the heaviness of the cream.

It had been a long evening, and my tummy was indeed brimming with novel and fantastic food. But more so, it was a very eye-opening experience as it was the first time I’d gotten the chance to learn about traditional German Spring fare and the meticulous procurement of its ingredients.

CURATE’s Spring Menu 2018 is definitely an excellent way to expand your gastronomic education as much as your palate, and might serve as a revelation to many that German cuisine is much more than just sausages and sauerkraut.