Clarke Quay was named after Sir Andrew Clarke, Singapore’s second Governor and Governor of the Straits Settlements from 1873 to 1875, who played a key role in positioning Singapore as the main port for the Malay states of Perak, Selangor and Sungei Ujong. 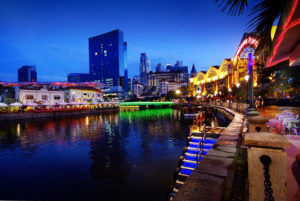 The old harbor area around the Clark Quay was converted into a happening place with cafes, restaurants, shops and bars. It has become the toast of the town and is the favorite area for club hopping. So you can shop till you drop, then have a good lunch and later head out for a night of partying at one of the clubs in the area.