The City Hall  in Singapore is a national monument gazetted on 14 February 1992. It can be found in front of historical Padang and adjacent to the Supreme Court of Singapore, it was designed and built by the architects of the municipal government, A. Gordans and F. D. Meadowsfrom 1926 to 1929. A flight of stairs takes visitors from the Corinthian colonnade to the main building. The building was constructed to replace several houses designed by architect G.D. Coleman. It was first known as Municipal Building until 1951 when Singapore was granted city status by King George VI. 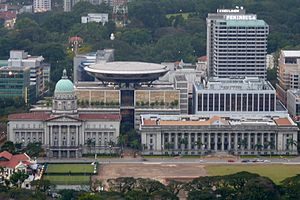 The City Hall has been declared as one of the national monuments of Singapore. The building was completed in 1929 and was originally known as Municipal Building. It became the Singapore Judiciary in 1987. The historic building has witnessed and staged some of the most significant events in the history of Singapore. The British accepted the surrender of the Japanese army at the City Hall on 12 September 1945 which formally ended the Japan’s occupation of Singapore. It was here that Lee Kuan Yew, as Prime Minister, proclaimed self-government for Singapore on 5 June 1959. The merger with Malaysia on 16 September 1963 was announced here. When Singapore separated from Malaysia, the first fully-independent Singapore Government was sworn in at City Hall on 9 August 1965. Right now the City Hall is closed and will reopen in 2015 when it will be merged with former Supreme Court Building to form a gallery to house Singapore’s national art collection.