The Changi Museum is a museum dedicated to Singapore’s history during the Second World War and the Japanese occupation of Singapore in particular.

The museum has a collection of paintings, photographs and personal effects donated by former POWs. Among the collection is a series of paintings and sketches by a POW named William Haxworth which provide valuable insight on the daily life of the internees during the occupation. In 1986, Haxworth’s wife donated a collection of over 400 paintings and sketches to the National Archives of Singapore. The museum is also famous for its replica of the Changi Murals, a set of five murals made by the POW Stanley Warren

In Singapore, this tragedy was particularly painful for Prisoners-of-War (POWs) and civilians who were interned at the infamous Changi Prison during the Japanese Occupation. The Changi Museum is a sombre reminder of this dark period, and sheds light on the emotional events that unfolded here between 1942 and 1945.

The museum opened at its current location on 15 February 2001 to coincide with the 59th anniversary of the fall of Singapore to the Japanese in 1942. Here, visitors can view photographs, drawings and letters by prisoners and take a 45-minute guided tour around the site. Audio tours that relate the experiences of men and women who were imprisoned at Changi are also available. 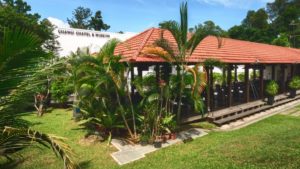 Also in the museum is a collection of watercolour paintings by Mary Angela Bateman who was among the thousands of women and children held at Changi Prison for more than three years during the war.

Located in the traditional Malay ethnic village of Changi, the Changi Chapel and Museum bears witness to the causalities of the World War II. The Singaporean prisoners of war were interred at the now demolished Changi prison by the Japanese. The prisoners of war the Changi prison created a simple chapel to have a place of solace. The chapel felt into disarray after the end of World War II. It was rebuilt in 1988 and relocated and converted into a chapel-cum-museum. The museum contains letters, drawings and photographs of the internees at the Changi prison. Learn all about what led to the fall of Singapore in the Second World War by signing up for the Battlefield Tour at the museum.