Pizza delivery. I don’t think anyone loves lukewarm pizza with semi-pull-able cheese, but it’s not like we could live without it.

What else are you going to do for your next party? Let’s be real, you’re not going to cook, it’s way too much effort. You’re not going to physically dabao food either – we’re all lazy people. And so, you make a little compromise and choose the most affordable and convenient option: pizza delivery.

But once you’ve made that choice, you’re not done yet. You still have to decide which pizza delivery service you’re going to order from, the flavour, what size, how many, so on and so forth. I know, it’s a complicated process that can get a little stressful at times; you have my sympathies.

Here’s how we help ease your decision-making process by conducting a blind taste test to determine which pizza is the best, judged by the following criteria. Pizza clipart by AdriOfTheDead on RedbubbleThese five pizza deliveries include Sarpino’s, Domino’s, Pizza Hut, Pezzo and Canadian. Now, has this piqued your interest? From each pizza delivery, the default order was a Hawaiian Pizza, regular crust. Here are the results from the general consensus; you might want to sit down for a bit. Unfortunately for Canadian 2-for-1 Pizza, it was collectively agreed upon as the worst out of all five. I know, the pizza looks rather appetising in the picture (kudos to the photographer), but you’ve got to trust me when I say it’s anything but. You might be enamoured by the ‘2-for-1’ deal, but perhaps it’s more appropriate you remember it as ‘2 OR 1′, considering that’s its average score over five. Among its many, many shortcomings, the fact that it had a strange, unpleasant aftertaste was the most prominent. Some even said it tasted ‘plasticky’ — that really doesn’t sound good. Besides its less-than-pleasant aftertaste, there were also complaints that the sauce was bland, making the pizza quite flavourless. When freshness is already compromised, the least we could expect is some good, powerful flavour, but sadly, Canadian falls short.

Still, that doesn’t mean that you have to stop ordering from Canadian if you’ve always been doing so; the pizzas are quite affordable, and that’s already a great plus point. But if you’re looking for great quality, then perhaps Canadian isn’t your best bet. Okay, I’ll admit I’m a huge fan of PEZZO, especially their Pepperoni Party. I know this article is about pizza delivery (yes, PEZZO delivers), but PEZZO is always my go-to takeout pizza when I’m craving for an unhealthy midday snack. Sadly, it didn’t do as well as I’d hoped it would. 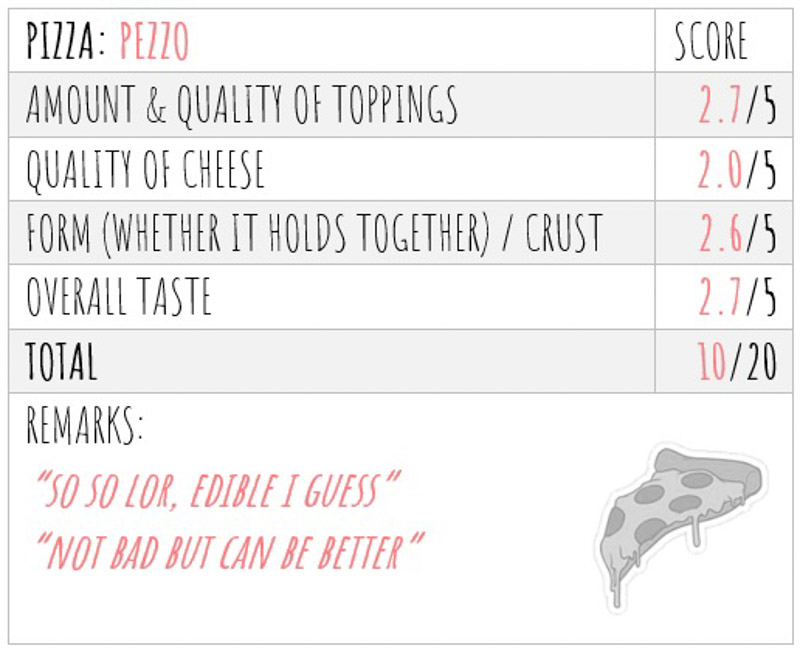 I think the best way to describe this pizza would be average. It literally scored the passing mark, and didn’t fare particularly well, or particularly terribly in any aspect. However, this could be due to the very mixed reviews this pizza had gotten. Some thought that the pizza was delicious, describing its taste as ‘wholesome’, ‘balanced’ and its ingredients ‘harmonious’. My favourite thing about this pizza was that it came with a copious amount of toppings.

One point of contention, however, was its crust. Some enjoyed how thick and doughy it was, while others despised it for the same reason. There were also some complaints that the cheese tasted strange. Well, I guess you can never please everyone. For one, the crust wasn’t cooked completely through (which is frankly unacceptable), but many thought the pizza was packed with flavour. Another point of criticism was that this Aloha (Hawaiian) pizza carried a sour taste, presumably from the tomato sauce. Strangely enough, some detested this because of its sourness, but others found it to their liking. I, for one, didn’t have much of an issue with the sauce because tomato sauce is always bound to be a little sour. And just because this one, in particular, is a bit more so than the rest, doesn’t mean that it isn’t good.

Sarpino’s Aloha was praised for its chunkier pineapples that were given in greater quantity. I know some people don’t believe in having pineapples on pizza, but those in the opposing camp will certainly enjoy this pizza!

Do be warned, however, that Sarpino’s pizzas are a little pricier than the rest, so if you’re looking for something more affordable, this wouldn’t be a great choice. Cue the Pizza Hut Delivery jingle. I’ve always been a little ambivalent about Pizza Hut, partly because of the increasingly excessive cheese-themed pizzas they keep advertising. But I guess I should learn to put my trust in Pizza Hut, considering that it emerged as the runner-up in this taste test. The beauty of this Pizza Hut pizza lies in its wonderfully fluffy and soft crust, which many of our taste-testers enjoyed very much.

It’s a lot like bread, so you’re getting both flavour and texture in the crust. Topped with a delicious tomato sauce and traditional Hawaiian ingredients, this pizza was quite the stunner. One point of criticism, however, was that there was an uneven spread of sauce. Due to a lack of sauce, some slices were a little plain. But compared to issues like having an uncooked dough or bland sauce, this is but a tiny problem that, on a better day, probably wouldn’t even exist.

I think most of us were rooting for Domino’s, and I don’t think it’s a surprise that it won. Domino’s is my go-to pizza delivery, and I’m guessing that it’s the same case for many of you too. Compliments were aplenty for Domino’s Hawaiian Paradise; in particular, the sauce impressed many of our taste-testers, because of its pleasant sweetness and robust flavour.

The crust was executed quite well – it was light and airy without being too thick. I especially loved how chunky the ham was, because it gave some extra flavour to the pizza. However, nothing is ever perfect, so Domino’s pizza still has some room for improvement. Some thought the pizza was a little too powdery; one of the comments even likened it to Johnson & Johnson baby powder (I thought that was quite hilarious). It wasn’t so much of a problem for me though. Now, even though we’ve found our winner, I believe that it’s only because we pitted each of these pizzas against each other that the differences in quality were so pronounced. For instance, Canadian 2-for-1 Pizza wouldn’t seem as bad as it did if you were to just order Canadian alone. So it’s not that any of these pizzas are particularly terrible, it’s just that some are better than others in certain areas.

Don’t let this taste test stop you from ordering from any of these pizza joints; instead, perhaps use this knowledge to help you make a more informed choice the next time you order pizza delivery!

*This post was NOT sponsored by any pizza delivery brands.

Although we wouldn’t mind if any of these pizza delivery brands sent a couple of free pizzas our way!